We Brake for Skies

Posted on October 8, 2012 by Jeanne Faulconer

Yesterday we were passing through Barboursville on our way back from a soccer tournament. The trip had been especially pretty, with the air taking on a golden glow as two full days of hard rain transitioned Virginia from summer humidity to autumn chill. The leaves haven’t really begun turning in earnest; they’re just blushing a little, but the skies!

I was already raving about them and threatening to stop to take photos — U.S. 33 from Zion’s Crossroads through Gordonsville and Barboursville to Ruckersville to Stanardsville is a picturesque route of board-fenced farms and sweeping mountain views across round-baled hay fields, along with quaint homes and turn of the century storefronts.When the skies are lit up, too, and the trees are starting their turn, it’s hard to resist the urge to take pictures.

Then Nick spotted the rainbow that made the decision for me. 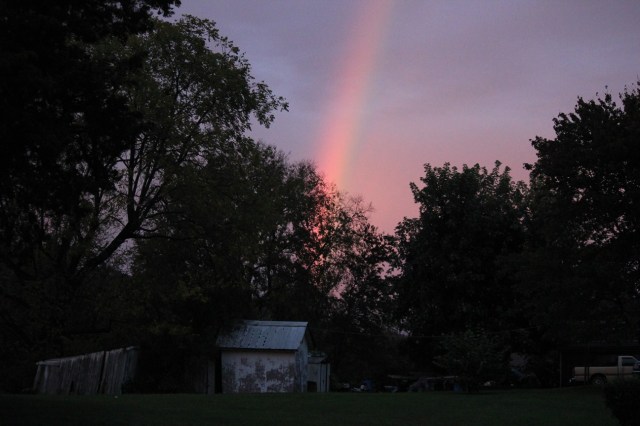 By the time I found a safe place to stop and got out of the car, the rainbow had already faded a little, but I managed to get a few shots.

Even better, a young family had stopped, and Dad was taking pictures of Mom and the two kids, so I was able to use their camera to take a picture of the four of them in front of the rainbow.

Then I turned around. The sky above the white country church across the road looked as much like an idealized painting of such a sky as it could and still be real.

Just then, the geese arrived. I am not making this up. 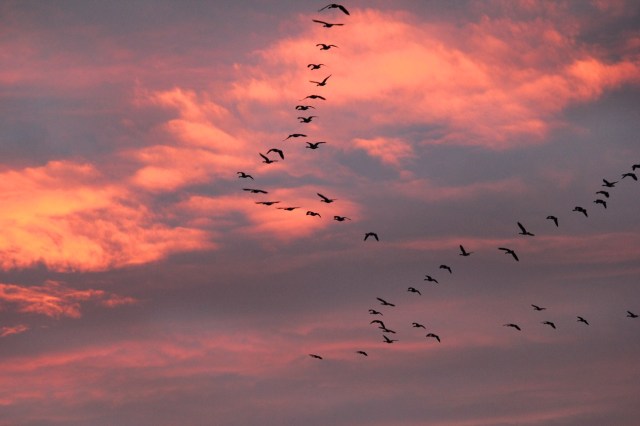 I know. Sometimes it’s just too much.

I’m whirling around with my camera in some little gas station parking lot in the middle of nowhere, having just leapt out of a car full of wet soccer tournament paraphernalia, having just slept a total of about eight hours in two nights, having just driven 400 miles in two days, and within 20 minutes of home, but I’m completely unable to get back in the car and drive. 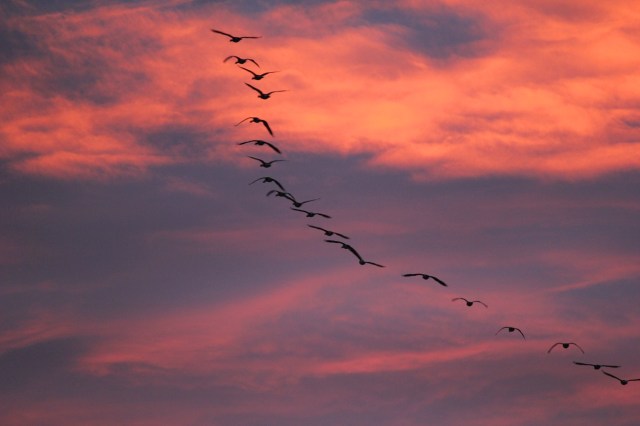 Nick’s laughing at my trifecta, and dusk is getting duskier, and I’m snapping and awestruck.

These photos aren’t especially artistic or high quality, but, like most of my photos, they will help me remember. This was an evening when the skies changed our journey from commuting to compelling, an evening apart.

3 Responses to We Brake for Skies